Building a sovereign blockchain with Ignite CLI allows you to make your own rules over development. 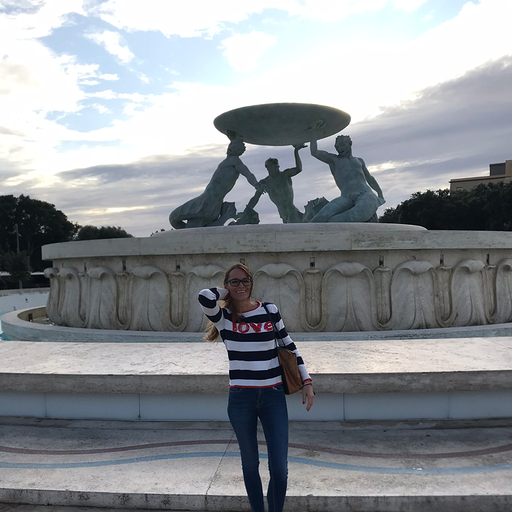 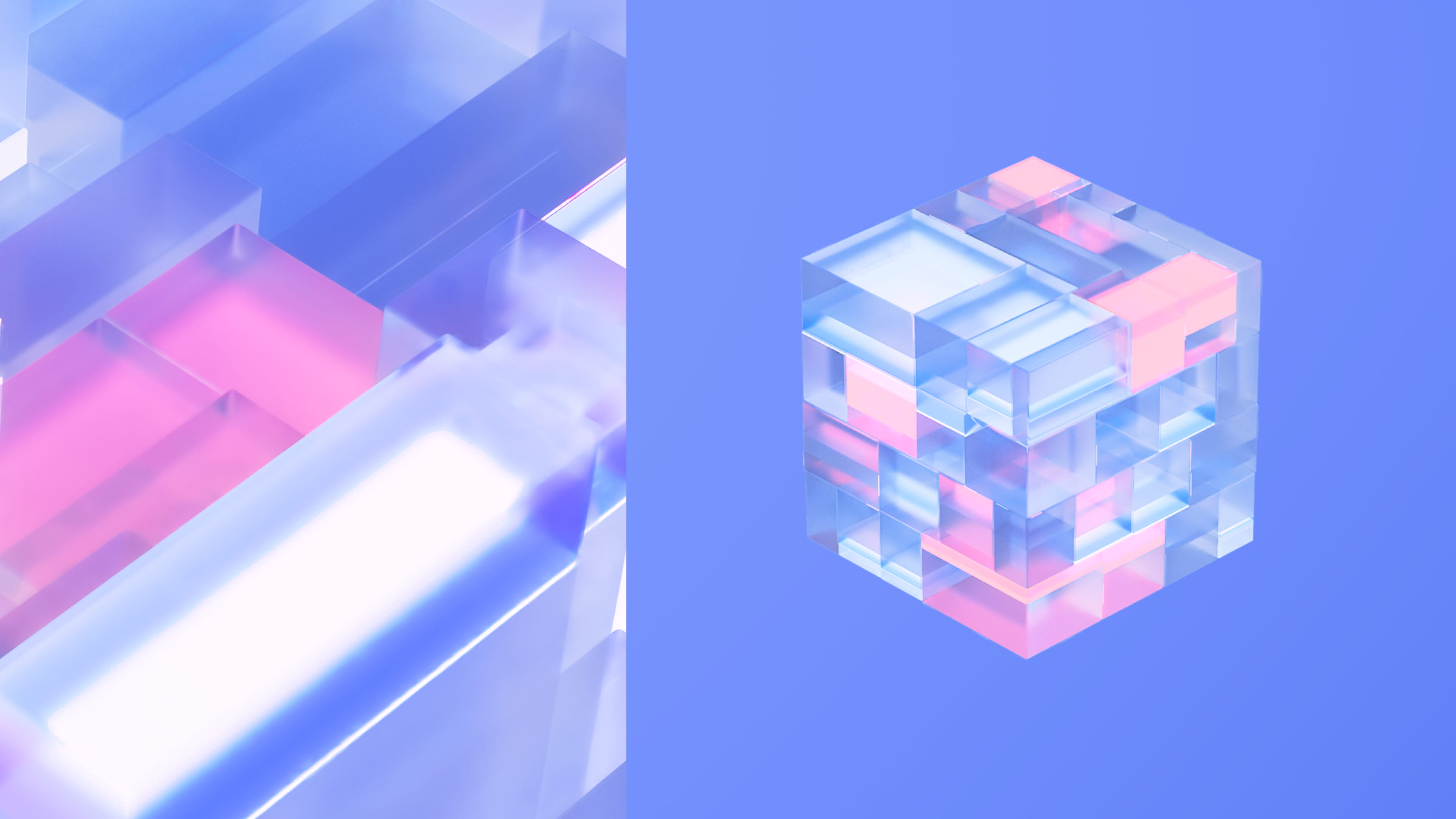 Global spending on blockchain technology is expected to grow from $1.5 billion in 2018 to approximately $15.9 billion by 2023. Unsurprisingly, this expansion brings about a need for more blockchain developers to enter the space. In fact, blockchain was the most in-demand hard skill of 2020, according to this LinkedIn survey.

As the natural law of supply and demand dictates, we find ourselves in a seller’s market with blockchain developers being able to command attractive above-average salaries around the globe. For developers of all stripes, now, more than ever, is an excellent time to explore the world of blockchain and grow your career in this fascinating industry.

Yet, many developers are stopped in their tracks when it comes to the concept of “blockchain.” They believe that blockchains are difficult to build, that they must learn entirely new programming languages, or that the barriers to entry are simply too high. While that may have been the case a few years ago, developer-friendly tools such as Ignite CLI are quickly changing the game.

The Advantages of Ignite for Developers

The first version of Ignite CLI was launched in July 2020, marking a turning point for developers looking to build their own blockchains. Since then, Ignite CLI has undergone multiple iterations to improve the developer experience and make creating a production-ready blockchain as simple as possible.

You Are the Layer One Protocol

The key difference between building a blockchain with Ignite CLI and creating a smart contract on Ethereum is that, with Ignite CLI, you are building an entirely autonomous application-specific blockchain that lets you be the Layer-1 protocol. Those words alone may not mean that much at first, so let’s dig into why this is so important.

If you build a decentralized application (dApp) on a blockchain like Ethereum, you are subject to the same limitations and restrictions affecting the layer one protocol. So, for example, the Ethereum network is currently at 98.63% capacity. Surges in the price of ether and traffic flowing to DeFi applications cause a large spike in both fees and network congestion.

With the average transaction fee on Ethereum reaching a dizzying height of around $65 in May of this year, many blockchain developers and everyday users are being priced out of transactions. A hefty fee for accessing a high yield through liquidity mining on a DeFi app or a large trade on a decentralized exchange may not hinder all users. But if you’re a blockchain game developer trying to sell $5 in-game items or $20 NFTs, choosing Ethereum as your home is simply not viable.

In fact, many applications that don’t offer high yield are being forced to migrate to other networks or simply close up shop. Even before the $65 record-high average TX fee, the effects of 2020’s “DeFi summer” caused many applications, such as Unilogin, to shutter operations. The team’s poignant blog post simply led with “Unilogin is out of gas.”

We know that existing on top of Ethereum offers considerable benefits. You get access to a considerable user base, interaction with hundreds of other dApps, and the security associated with the network. But none of these advantages matters if you have to wait for Ethereum to fix its scaling problems, lose potential users because of high fees, or face being priced out of the network.

You Are Entirely Sovereign

Building a blockchain with Ignite CLI allows you to be entirely sovereign and make your own rules over development. Head of developer experience and Ignite lead Denis Fadeev explains, “When you build something in this industry, there are essentially two paths. It’s either a smart contract or a blockchain. Those are two very different things. And when you talk about building chains, there again, there are two different approaches. You can build sovereign chains or you can build chains that depend on a parent chain.”

He continues, “So, with Polkadot, you don’t build sovereign chains, as it’s not the intended use of their toolkit. You build chains that literally revolve around the central Polkadot relay chain. Whereas with Cosmos, the goal is to give people tools to build sovereign chains. Empowering people to create sovereign independent chains is where Cosmos truly shines.”

Josh Lee, aka Dogemos, a long-term Cosmos contributor and CEO of Chainapsis (the team behind Keplr wallet) explained in an earlier article, “Being sovereign and having your own blockchain means you get to set your own system and your own boundaries over how you interact with others. If you exist as a smart contract, you are just a tenant living in a rented house.”

Sovereign applications can make their own decisions over all matters that affect the network, such as governance, validators, when to push network upgrades, or incorporate new proposals. They enjoy the high throughput and scalability of Cosmos blockchain technology and can connect to a vast and growing ecosystem of leading blockchains (that already comprises the likes of Binance Coin, Terra, OKB, Cosmos Hub, and Crypto.com) through the Cosmos Inter-Blockchain Communication (IBC) protocol.

Connect to a Growing Ecosystem

Being sovereign sounds empowering. But it may also sound a little intimidating, especially for the uninitiated. After all, sovereignty also comes with its own implications. How do you find validators to secure your chain, how do you reach new users, or interact with other decentralized applications in the way that the burgeoning DeFi sector on Ethereum allows?

With scalability and interoperability at the heart of the Cosmos vision, all chains built with Ignite CLI come with IBC by default. IBC readiness means that you can easily connect to any IBC-enabled chain in the ecosystem and let users transfer data and other assets, and benefit from a network of application-specific blockchains.

The most advanced cross-chain DeFi protocol, Gravity DEX, is also launching this summer and will encourage new chains to trade and create liquidity, more traders to start arbitraging, and more developers to discover a new path to start listing their tokens permissionlessly and getting people to invest.

Thanks to the Gravity DEX protocol, blockchain developers can now build a blockchain with Ignite CLI in minutes, create and list their tokens, and get instant price discovery on their digital assets. Building blockchains with Ignite CLI is especially beneficial for emerging projects that don’t have the funding to pay for a costly listing on a centralized exchange.

Beyond the 244+ apps and services in the Cosmos ecosystem today that will benefit from an advanced cross-chain DeFi protocol, work is being carried out by the Althea team to connect the Cosmos Hub to Ethereum via the Gravity Bridge. This is a secure decentralized bridge that will allow Ethereum liquidity to flow into Cosmos while benefiting Ethereum users with lower transaction fees and faster times, unlocking the vast potential of DeFi.

As Althea CEO Deborah Simpiertold Cryptoslate, “DeFi is increasingly difficult for retail traders to access… Gravity Bridge is democratizing DeFi for everyone.”

Ignite Is Easy for Any Developer to Use

Many developers still hold the belief that building a blockchain is hard. And that’s probably because it used to be. But with Ignite CLI, building an application-specific blockchain is as easy as writing a smart contract — and you don’t have to learn Ethereum’s programming language Solidity.

“I haven’t seen any tools that surpass Ignite CLI in functionality or ease of use,” Denis enthuses. “It’s the easiest way to build a blockchain and, coming from a web developer background, it very much reminds me of developing with traditional frameworks like Rails or Django.”

Ignite CLI features hot reloading, simple to use CLI commands to scaffold components, and very intuitive configuration syntax. Ignite CLI also scaffolds a Vue 3 web application that lets you, as a web developer, understand how a web app talks to your chain and serves as a solid foundation for your frontend.

Ignite CLI is downloaded with a single click so that developers can start building immediately after installation. With just a single command you can scaffold a module, add CRUD functionality, connect your chain to any IBC-enabled chain with a built-in relayer, and much more.

The Ignite CLI interface makes it easy for developers to start building a UI for their chain. With automatic client TypeScript code generation, component library, and out-of-the-box integration with Keplr wallet, developing a client-side app for a blockchain has never been easier.

Keplr is the most popular wallet extension in the Cosmos ecosystem and is easy to use, IBC-compatible, and allows end-users to see their token balances and sign transactions directly from the extension. For additional Ignite CLI features, check out our recent Ignite v0.16 Brings Keplr, Better IBC support, and a Whole Lot More blog post.

Blockchain energy consumption is a contentious issue. However, it’s one that pertains to energy-hungry blockchains using the Proof of Work consensus mechanism, like Bitcoin or Ethereum. Cosmos chains use Proof of Stake instead, which has a much higher throughput and a much lower carbon footprint. 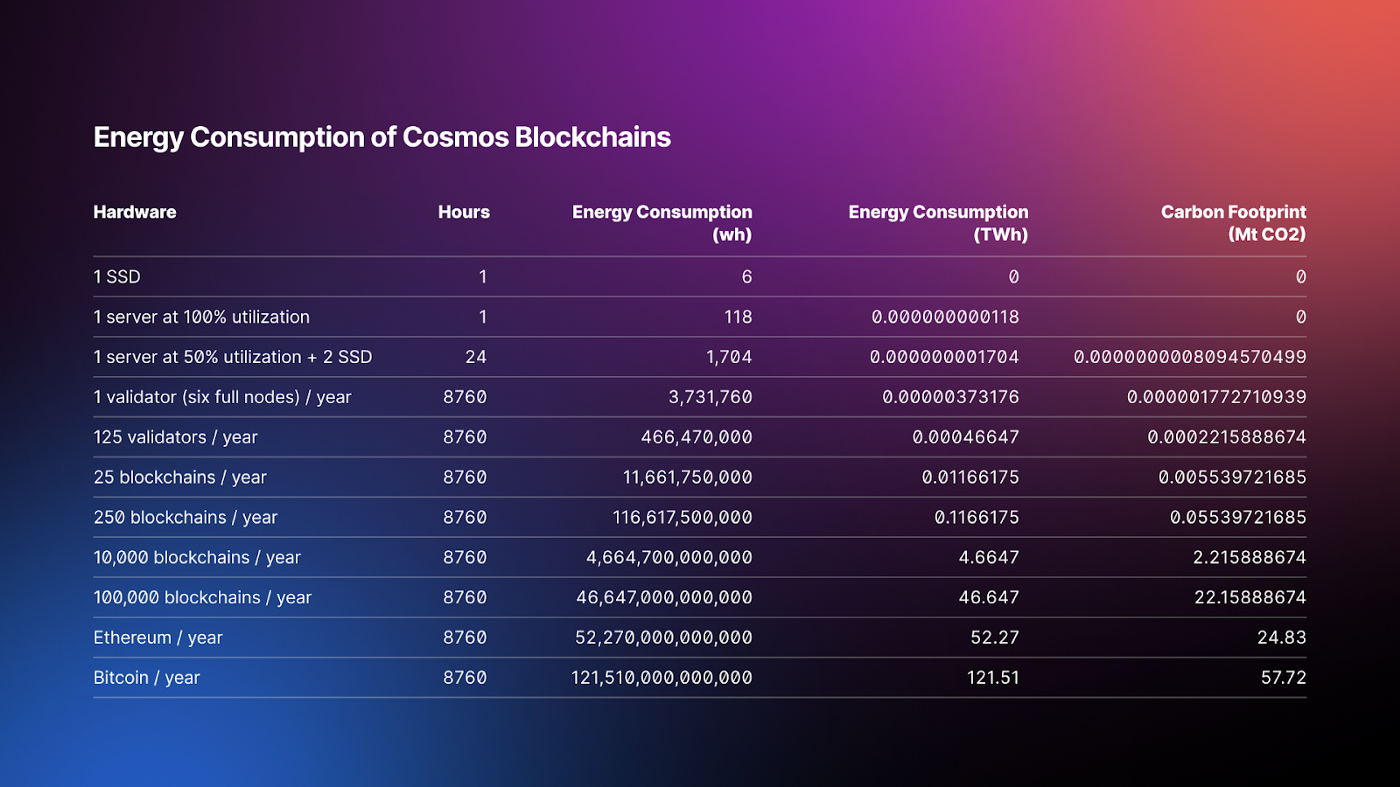 The current estimated annual energy consumption (measured in TWh) of running the Bitcoin network for a year is 121.86 TWh, while Ethereum consumes around 52.27 TWh per year. By comparison, the estimated yearly consumption of a Cosmos-based blockchain is less than the energy consumed by Bitcoin and Ethereum in a single day (0.00046647 TWh).

Even running 100,000 Cosmos blockchains would still use less energy than Ethereum per year (46.647 TWh). That’s a difference of orders of magnitude that will allow for a sustainable multichain future of independent interconnected blockchains that retain their own sovereignty while interacting and enriching the ecosystem for all.

As more and more corporations, governments, and individuals begin to realize the benefits of blockchain technology, its use cases are rapidly evolving. From decentralized finance to NFTs, blockchain gaming to healthcare, the supply chain, energy and utilities, or decentralized autonomous organizations; we’re on the cusp of unimaginable innovation that can be enabled by an interconnected multichain blockchain ecosystem. And it all starts with Ignite. What will you build?

Get Started with Ignite CLI

Got questions? Join our channel on Discord: http://discord.gg/ignite where you’ll find an active community of Ignite users and developers. They can help you with any doubts and make building your own Cosmos blockchain and connecting to our ecosystem even easier.